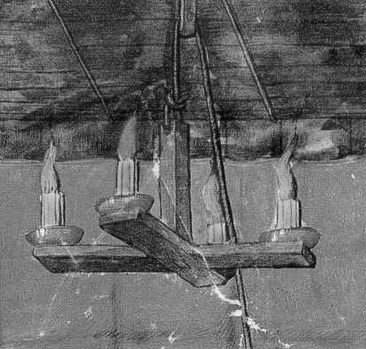 Up to the end of the 14th century a wood chandelier often consisted of two crossing timbers with spikes protruding through to secure candles. While rather simple these primitive wood chandeliers served the purpose of providing illumination from above.

During the 15th century chandeliers began to be fashioned from metal formed into the shape of a ring or crown. In time they became decorative and more complex making them a status symbol and a decorative focal point. With more and more focus being put on appearances wood was pushed into the background by the new craze for extravagant metal chandeliers.

In the early 18th century wooden chandeliers started making a small comeback through the use of carved or gilded wood. By mid 19th century gas lighting caught on followed by electric lighting in the 1890’s. With the widespread introduction of electric lights the chandelier by enlarge lost its status symbol.

Towards the end of the 20th century chandeliers often times were just decorative focal points with no ability to light. In time the chandelier would once again be united with the ability to illuminate. Today American handcrafters have been able to restore the wooden chandelier to its former glory by producing Colonial Era chandeliers that have a primitive look and feel with striking heirloom quality beauty while being second to none in modern illumination.