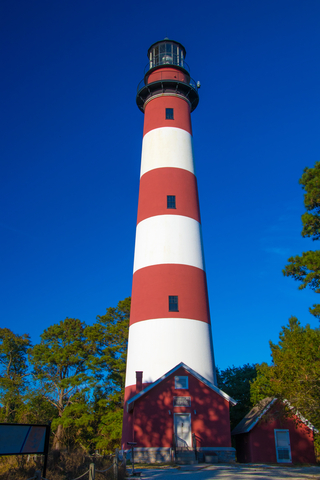 Around thirty years later, in 1860, another lighthouse was being built to take the original’s place. This time it would be a taller and more powerful lighthouse, made out of brick. However, due to the Civil War raging from 1861-1865 it stopped the progress on the tower. Once the Civil War ended, work began again, and it was finally finished in the year of 1867.

The bottom diameter of the lighthouse is twenty-seven feet. The tower is one hundred forty-two feet tall, but it sits one hundred fifty-four feet above the ocean. It has two lights that create a flash as they rotate, and the light can shine as far as nineteen miles away.

For many years the United States Coast Guard owned and maintained the lighthouse. In 2004 The Coast Guard turned the ownership over to the Fish & Wildlife Service, but the Coast Guard still maintains the light. This is due to the fact that the Assateague Lighthouse is still used as an active navigational aid.

This lighthouse is a historic place and many people come to see it. It stands only one-quarter of a mile away from Chincoteague Island, so it draws visitors from there. They can take the short drive or walk over to Assateague Island, and see the red and white striped lighthouse, that has been a part of history for so many years.